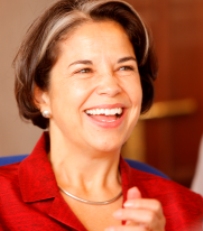 Under Secretary of State for Democracy and Global Affairs María Otero.

Under Secretary of State for Democracy and Global Affairs María Otero recently spoke on a panel at a Brookings Institution event on mobile banking.
Otero, the former president and CEO of ACCION International, told participants in the May 16 event in Washington, DC: “At the heart of this work is the enhanced livelihood of citizens that otherwise would be operating outside of the financial system. We know that mobile money is one way in which we can harness their own potential as economic citizens and move them forward.”
Other key comments from Otero’s presentation:
“When I left ACCION International almost two years ago, I had spent over two decades witnessing microfinance and I had watched it go from subsidized micro-loans to a focus on self sufficiency to an emphasis on savings to a full suite of financial products that could be made available to low-income people.”
“We know that microfinance banking broke the mold and it did it over 20 years ago and it broke the mold because it really moved away from the long-held definition of risk assessment, of traditional collateral, of what it took to think about people as being bankable clients, and now we know, on the basis of that work, that financial inclusion is really the path to economic growth and really the path to greater stability among the poor.”
“[W]e’re posing towards a breaking of the mold again and moving towards, I would say, a different paradigm shift in microfinance, one that is really looking at removing … all those walls that we have always seen be part of banking to ones which just don’t exist anymore and where the clients that used to come to bank, now we see, really, the banks going to the clients.”
“I want to talk about three areas in particular that the government can play a role in advancing this industry in the direction that we want it to. The first one is as convener, the second one is as regulator and policymaker, and the third one is as a catalyst in this field by putting into place some of these principles itself.”
“[At] all levels of government, the private sector also becomes a very important player, whether it’s the presidents of companies or CEOs or really technical experts.”
Click here for a full transcript of the event, “Expanding Financial Inclusion in Developing Regions:
Economic Growth Through Innovations in Mobile Technology.”