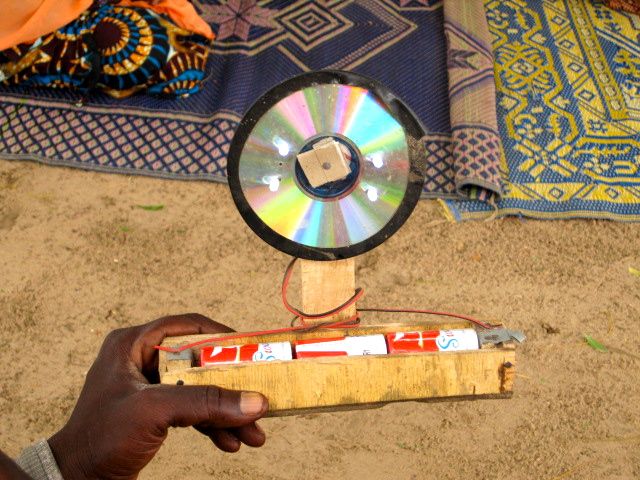 Paul Rippey, had an illuminating experience while traveling through Niger this week.

Paul, on a mission to one of the five poorest countries on the globe, works with savings groups, which are blooming all over the continent thanks to the efforts of committed international NGOs such as CARE, Oxfam, Plan International, Catholic Relief Services (CRS) and the Aga-Khan Foundation (AKF). One of the many purposes is to look for ways to improve the lives of the poor by increasing their access to modern energy, and that starts by finding out what energy sources people are using now.

When he reached the village of Gouroubankassam, Paul came across a most peculiar device: an artisanal LED lamp, locally produced out of Nigerian LEDs, Chinese disposable batteries and assembled scrap material, including wood for the stand and a used CD as a reflector for the LEDs. The best part: it only cost about 50 cents! These lamps have spread rapidly across the region, and are sometimes called “Obasanjo’s”, mocking the former Nigerian president who promised rural electrification but never delivered.

One would immediately point out that, unfortunately, the market price doesn’t reflect the true cost of the lamp, as unaccounted financial and environmental costs arise: this device eats up batteries within two weeks, which are then discarded and left to contaminate fields and water sources. Solar energy is once again the best way to avoid such externalities, but the solar lanterns available on the market today remain too expensive for the poorest of the poor, even with access to some sort of credit facility.

Still, we think this DIY lamp could have something to teach us. Early in the Energy Links project, we had considered the opportunity of assembling solar devices in Africa, but quickly realized that it would mean lower quality products at higher costs than if production took place in Asia. However, can’t we marry the ingenuity and low-cost of local village assembly with the advantages that solar power provides? Can’t we just add a small solar panel to this ultra affordable artisanal lamp? Is this the next way to drastically bring costs down? There could be a huge market for Artisanal Solar Kits: an envelope containing a few LEDs, a basic unframed solar panel (0.5W or less) and a rechargeable battery. No need for a factory: micro-entrepreneurs will do the rest.  They could reuse discarded wood or scrap metal for the base and wire the battery pack to the panel. Such kits would help develop the solar market, but more importantly could provide a basic clean lighting solution to the ultra poor until they can upgrade to more sophisticated and higher quality devices.